As a Matthew McConaughey fan I was glad to see him in many incarnations this year. There were the Southern Gothic freaks of Flannery O'Connor descent, and small town characters that faintly evoked Sherwood Anderson's grotesques.


Richard Linklater trekked to Carthage, Texas (not just Texas, but East Texas, which the film makes clear distinguishes it, in dialect, conventions and inclinations, from other distinct Texas regions) to tell the true story of undertaker Bernie Tiede, delightfully portrayed by Jack Black -- a compelling figure on the screen. Shirley MacLaine plays the wealthy, widowed sourpuss Mrs. Nugent, whom Bernie sets himself the challenge to befriend -- a challenge he achieves too successfully as she increasingly circumscribes his independence to the point of essentially holding him hostage. He finally reaches the breaking point, for which we, and the Greek chorus of Carthaginians, forgive him. DA Danny Buck alone, in a seriocomic turn by Matthew McConaughey, sees Bernie as deserving of punishment rather than as a victim of the smothering Mrs. Nugent. The townspeople of Carthage play themselves, including McConaughey's mother Kay. By turns charming and menacing, Bernie is a must-see for anyone who has ever experienced small town Texas. (Manohla Dargis's NYT review) 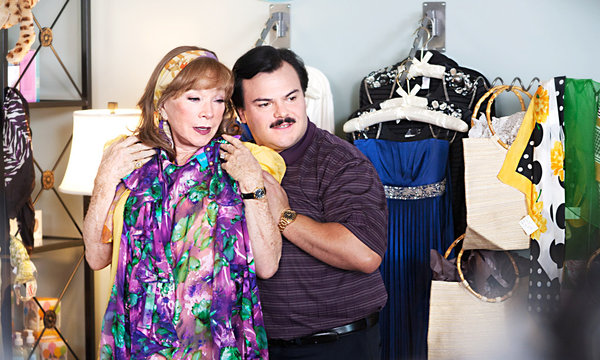 Steven Soderbergh's Magic Mike is mostly just plain terrible. I was at lunch with a friend, when out of the blue she said, "Let's go to a movie!" Magic Mike was the movie she picked. Walking out I remarked, "Well, that was the thinnest plot possible," to which she replied, "What plot??!!" Manohla Dargis, writing in the NYT, found Channing Tatum in the lead, as a construction worker who opens up his new employee to the world of male stripping to make an extra buck, "terrific." I simply found him miscast. By contrast, Matthew McConaughey as the club owner gives it his all and ya gotta love him for it. 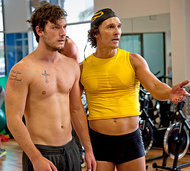 My indie theater staff tells me I saw the cut version of William Friedkin's Killer Joe, adapted from Tracy Letts's play. If so, the film still does what it can to earn its NC-17 rating. Matthew McConaughey can be superb (even in a failure of a movie like Magic Mike), and he does not disappoint as Joe. Chris has gambling debts and decides the easiest way out is to have his mother Sharla killed for the insurance money. Joe, the hit man he invites into his self-destructive American Gothic family, sees where the whole scenario is headed, and insinuates himself into the dysfunction with cunning manipulation. Manohla Dargis argues in the NYT that "The other characters are merely supporting players, and so too are the actors wrangling the roles," and believes Emile Hirsch (brother Chris) and Juno Temple (sister Dottie) are particularly miscast. I disagree. I think the ensemble works. I have peripherally known people like Hirsch's Chris. (I was rejected for a jury in juvenile court for a trial of a girl accused of a stabbing. She was 14, but if you didn't know that and saw her on the street you would have guessed a weary 35-40.)

Dargis also takes issue with Friedkin's direction. Again I disagree. Friedkin uses the seedy landscape to excellent effect as the backdrop for the domestic abjection of a family whose greed and stupidity bring their own downfall. Scenes oscillate between gritty vistas and the family's cramped trailer with fewer and fewer open spaces as the claustrophobia tightens. Dargis says Friedkin "...takes such a creepily intimate approach to Sharla’s and Dottie’s violent degradation that you might think he enjoys it." The camera work, it seems to me, doesn't intend to revel in the degradation; rather it seems designed to show us what we would rather not confront in the underbelly of human nature. The shots are artfully framed, the camera work interesting without getting in the way. And I defy anyone to fail to enjoy the moment at which Joe has had it with the drivel on the ever present TV!

Alert: This is not a movie for the squeamish. If you're bothered by psychopathic violence, physical and psychological, this is NOT for you. 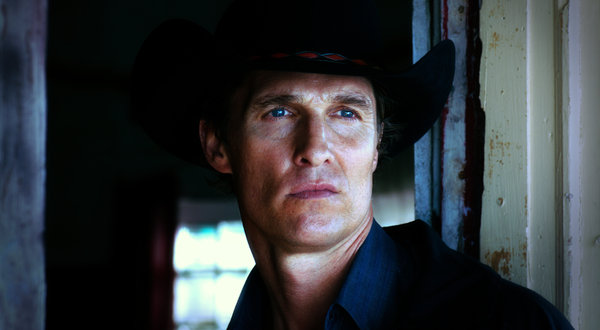 Lee Daniels (Precious) adapted The Paperboy from Pete Dexter's novel. A. O. Scott, writing in the NYT, calls it a "hot mess" -- and what a hot mess it is. A Southern Gothic Bildungsroman set in and around a pre-air conditioned Florida Everglades in 1969, every frame drips with humidity, sweat, sex. Nicole Kidman is Charlotte Bless who, in the course of pen pal exchanges with convicted killer Hillary Van Wetter (!), chillingly executed by John Cusack, has come to believe in his innocence. She convinces Fort Lauderdale investigative reporter Ward Jansen (McConaughey) and his researcher Yardley Acheman (David Oyelowo) to come to town and set justice right. The paperboy is Ward's younger brother Jack (Zac Efron), who can't help his hormone-fueled id from falling for the teasing, tease-haired vamp. To avoid a spoiler, suffice it to say that Charlotte and Hillary's first jailhouse encounter implicates the audience in its voyeurism as much as anyone physically present in the scene. The story slithers deeper into the Everglades, as it penetrates deeper into the id. Every performance is a gem in this steamy primordial ooze. 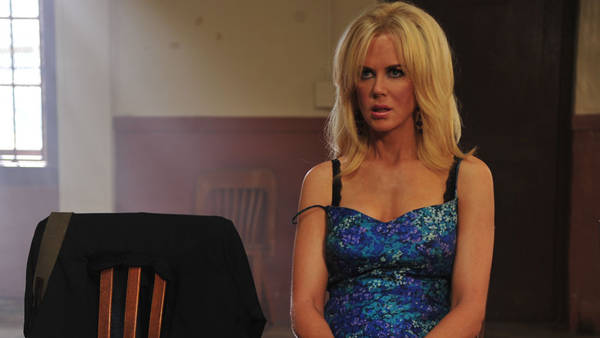