As we neared the end-of-year Oscar race the film makers who hoped their films would be the obvious contenders tried too hard to wrap themselves in Big Ideas -- only the Big Ideas weren't really that Big when you got right down to it, or the writers' and directors' attempts to tackle Big Ideas fell sorely short of the task. Even The Master, is a Big Ideas movie in a sort of anti-Big Ideas way, and in its own perverse way Lincoln suffers from the Big Ideas syndrome, too.

In addition to Big Ideas, we had multi-layered narratives, some we might even call multi-multi-layered. I discussed the recent fixation with layers in "Biopics...Or Not." There I said, "Into this category go Madonna's W.E., along with Brian Klugman and Lee Sternthal's The Words, and that morass of layers written and directed by Lana Wachowski, Tom Tykwer and Andy Wachowski, Cloud Atlas. The principle problem with this narrative trope is that the contemporary story always falls dreadfully short of the historical one. Is this a novelistic tic that has infected film through Stephen Daldry's adaptation of Michael Cunningham's The Hours, Gilles Paquet-Brenner's adaptation of Tatania de Rosnay's Sarah's Key, Wayne Wang's adaptation of Lisa See's Snow Flower and the Secret Fan, and the Wachowski-Tykwer adaptation of David Mitchell's novel?"

One of the cardinal rules of successful narrative, when it moves beyond allegorical morality plays and stock characters of good and bad, is that you have to care about the dramatis personae who populate it. All good actors will tell you that they never pass judgment on their characters, that their primary obligation as actors is to find the humanity within, no matter how horrific a character's actions. Ultimately, we have to care about the people we encounter on the page, the stage, the screen. I did not care about anybody in Oliver Stone's Savages, adapted from Don Winslow's novel, and set in Southern California on the Mexican border. Ben and Chon are friends who run a successful business growing medicinal marijuana of exceptional strength. They share O, a California-girl girlfriend who narrates the movie. The Mexican drug cartel wants to partner with them, an offer the friends refuse. The movie picks up pace when their paths cross with Salma Hayek's Mexican drug lord and her thugs played by Benicio Del Toro and Demián Bichir. The guys seek the help of a corrupt DEA agent, a manic John Travolta, who urges them to take up the offer. The dualities of borders of all kinds figure into the narrative, metaphorically and geopolitically -- not least of which is the distinction -- if, the film wants us to consider, there is one -- between savagery and civilization. (A. O. Scott's NYT review/A NYT Critics' Pick) 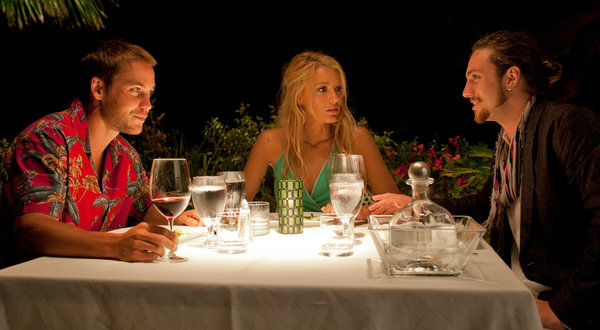 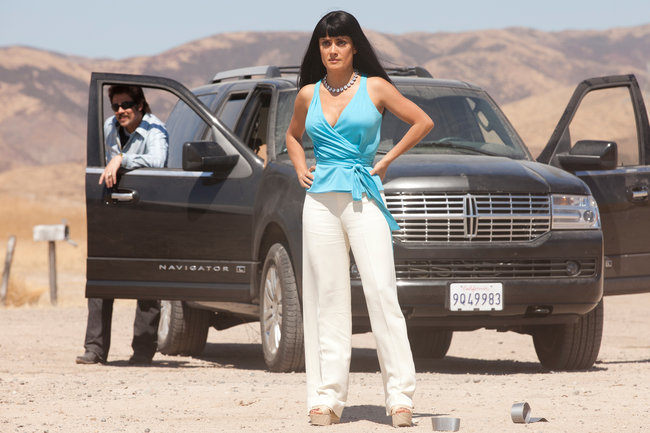 Set in a dystopian future Rian Johnson's Looper is a Philip K. Dick-esque time travel, sci-fi thriller. I don't think I can explain the premise myself, so I'll leave it to others. Here's Manohla Dargis in the NYT: Joseph Gordon-Levitt and Bruce Willis "[play] the same contract killer, Joe, at different ages. A looper, the young Joe works for an outfit that exists 30 years beyond 2044, where time travel exists but is illegal. Whenever the outfit wants to dispose of a 'problem,' it sends the problem with a hood over his head into the past where a looper is waiting with a gun to blow him to smithereens. The hook — you can almost hear the original movie pitch it’s so tidy — is that every so often the outfit sends back an older looper, who’s unknowingly killed by his younger self, which is how the 2044 Joe stares down his middle-aged counterpart."

Here's Dana Stevens in Slate: "[Joseph] Gordon-Levitt plays a hired assassin whose targets are sent back in time from the future. It’s 2044, and time travel hasn’t yet been invented, but—to employ the future-perfect tense useful mainly for time-travel movies—it will have been invented in 30 years. By that point, a fearful, vaguely post-apocalyptic government will have forbidden any use of the technology...."

In the case of Looper, I enjoyed the time travel layers and the questions the film poses, but does not answer or even deeply consider, as it careens, or caroms, toward its climax. I relied (too much?) on my willing suspension of disbelief. Stevens makes the point that "a well-thought-out straw diagram might have been able to get me through the movie’s last half-hour, in which timeless philosophical questions of free will vs. destiny, nature vs. nurture, and utilitarian ethics (would you consider killing a child if you knew it meant saving countless future lives from the monster he might grow up to be?) get raised, then chucked aside as the story hurtles to a rushed, gory conclusion...." Oh, well.
(Forrest Wickman, "Looper, Diagrammed with Straws" Slate) 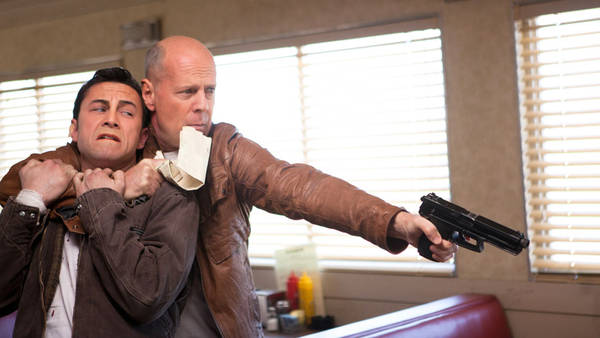 The movie about the The Boy, The Big Tiger and The Sea is OK. Ang Lee's aesthetically beautiful Life of Pi, based on the book by Yann Martel, tells the story of a boy on the threshold of manhood who finds himself alone in indifferent nature. Pi's father has packed up his family and booked passage from India to Canada. He has also packed up his zoo because he believes the animals will bring more if they are sold in America. Only Pi and a Bengal tiger survive the storm and shipwreck that befall their journey -- and another journey begins for Pi. I haven't read the book so I do not know if it indulges in the same -- what to call it -- naive grandiosity? that the film does. I thought it was me, but A. O. Scott was bothered by it, too, and remarks in his review that Pi "...embraces religion without quite taking it seriously, and is simultaneously about everything and very little indeed." Scott continues, "What is and isn’t real — what stories can be believed and why — turns out to be an important theme...albeit one that is explored with the same glibness that characterizes the film’s pursuit of spiritual questions." This returns us to the question posed in the indie Blue Like Jazz: "How can there be a God if Chicken Soup for the Soul exists?" 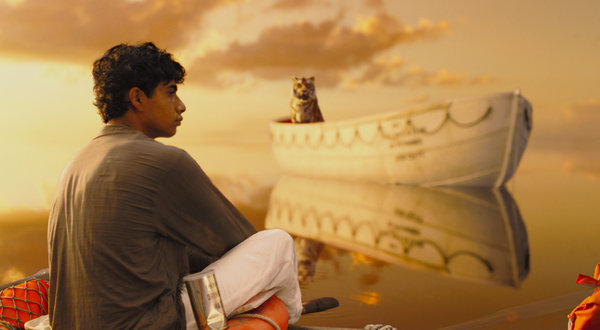 Talk about pretentious! Talk about delusions of grandeur! And way, way too many layers! Cloud Atlas sags under its own weight, and its Big Ideas spew forth in relentless CGI. I can't even begin to summarize this thing, which most everybody loved. I think the idea of Cloud Atlas, written and directed by Lana Wachowski, Tom Tykwer and Andy Wachowski from David Mitchell's 2004 book, is that there is a limited number of souls, and each soul lives many lives over time and space. I don't know if that's supposed to be understood as reincarnation per se, but something like that. Anyway, we're all connected. We're all connected. Did I say, we're all connected? I get it. I GET IT, ALREADY! Forrest Wickman in Slate makes a valiant attempt at deconstructing the layers and the Big Ideas that clog Cloud Atlas. A. O. Scott of the NYT loved it. Dana Stevens of Slate did not. Roger Ebert loved it. Rolling Stone's Peter Travers was underwhelmed. Andrew O'Hehir admitted its flaws in Salon but loved it anyway. The New York Post's Kyle Smith hated it ("I'll grant that the film has many layers. All of them are terrible") as did Rex Reed in the New York Observer. You decide... 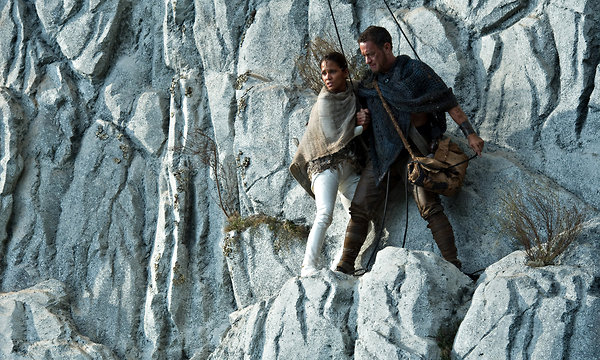 The layers in Robert Zemeckis's Flight are determined by denial. An alcoholic's denial, an airline's denial so that it can avoid financial repercussions, even denial a born again co-pilot crippled by the crash manages to wrest from his fundamentalist beliefs. Whip Whitaker, impressively conveyed by Denzel Washington, careens between assured swagger and pathetic self-pity. A seasoned pilot and a seasoned drunk, he is always high on booze and coke. Flying into Atlanta in a storm, Whitaker's aviation experience and intuitive skill allow him to save almost everyone on the manifest in a series of decisions that seem nothing short of miraculous -- all the while abusing enough substances to render any of the rest of us comatose. The airline moves swiftly to protect itself, which means protecting Whitaker, as the inevitable investigation ensues. The film is hard-edged, fast-paced, tight, driven...and the ending? Typical Hollywood. (Manohla Dargis's NYT review/A NYT Critics' Pick)

"Still Too Good, Too Bad or Invisible" by Nelson George in the New York Times 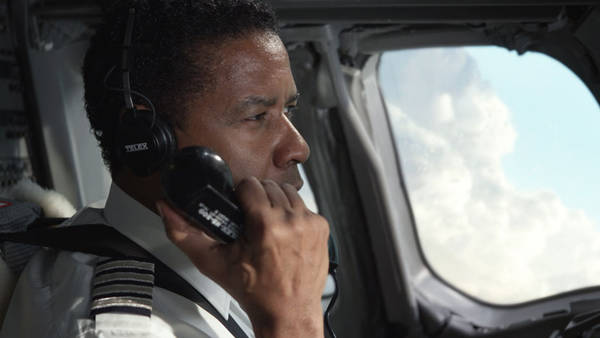 What a slog...  Tom Hooper's film adaptation of the stage musical by Alain Boublil and Claude-Michel Schönberg adapted from Victor Hugo's 1862 novel Les Misérables gives us the outline of Jean Valjean's crisscrossed life. Nobody in this thing can sing (well, Anne Hathaway is tolerable); even the chorus members are tone deaf. On top of everything else, as Manohla Dargis says, "Georges Sand apparently felt that there was too much Christianity in Hugo’s novel; Mr. Hooper seems to have felt that there wasn’t enough in the musical and, using his camera like a Magic Marker, repeatedly underlines the religious themes that are already narratively and lyrically manifest." By the time Valjean has been granted his release papers after being imprisoned for 19 years, "he has also become a Christ figure, hoisting a preposterously large wooden pole on to his shoulder." If you want to see a truly exceptional film interpretation of Les Misérables, you can do no better than Claude Lelouch's 1995 version set during the first half of the 20th century. A poor man, played by Paul Belmondo, is given a copy of Hugo's classic novel, and as he reads the book on his peripatetic journey through the French countryside, he comes to understand the parallels the novel holds for his own life. If you want meaningful layers, this beautiful film blows anything from this year out of the water. (Manohla Dargis's NYT review) 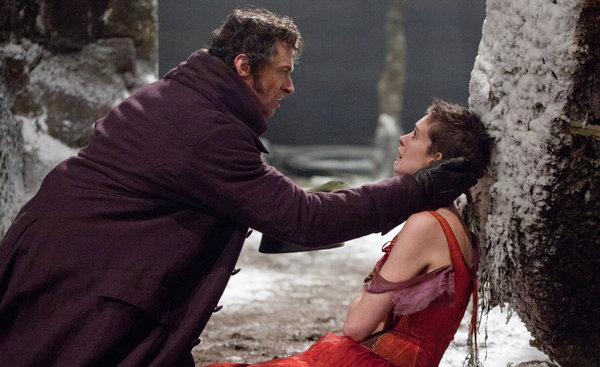