John Hillcoat's Lawless was written by Nick Cave and is based on Matt Bondurant's Appalachian bootleg novel The Wettest County in the World based on his forebears' true story. It's 1931, and the Bondurant brothers dominate the bootleg business in Franklin County, Virginia, supplying speakeasies throughout the region. A sadistic Mysterious Stranger in the guise of Chicago lawman Charley Rakes (Guy Pearce as The Devil Himself) rides into town to get in on the action. The Bondurants will have none of it, and bring a mob boss (Gary Oldham) in to assure that everyone's palms are greased in the manner to which they're accustomed. As the movie progresses we get each of the three brothers' -- Howard (Jason Clarke), Forrest (Tom Hardy), and the youngest, Jack (Shia LaBeouf) -- stories. Beyond the basic narrative line, the film does little by way of exploring its historical time and place. Lawless has its moments -- a Mennonite love interest (Mia Wasikowska) for Jack and The Prostitute with a Heart of Gold (Jessica Chastian) for Forrest -- but overall it is formulaic and clichéd. (A. O. Scott's NYT review) 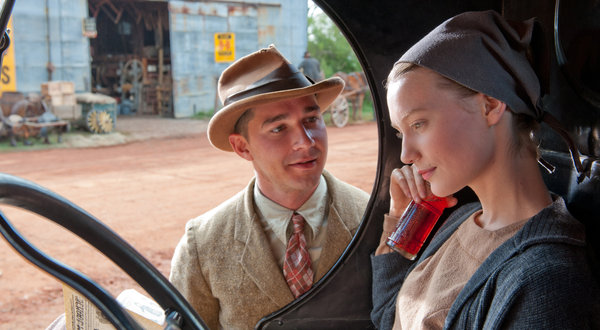 The lust for money is not unique to the United States, but money, commerce and exploitation have been central to the American Dream since 104 English men and boys settled Jamestown, and the Pilgrims landed at Plymouth. Lately the stories America tells itself about itself have run rife with cynicism, and Nicholas Jarecki's Arbitrage is another cynical tale about Very Rich People (VRP) who can get away with anything because... well, because they can. Neither hedge-fund manager Robert Miller (Richard Gere) nor his wife Ellen (Susan Sarandon) seem to do much of anything worthwhile. Writing in the NYT, Manohla Dargis observes that "It’s an enviable life, at least from the outside where most of us will be, pressing our noses against the screen to watch the beautiful and not yet damned." Arbitrage does bring to mind the starving serfs gazing through the windows of the Winter Palace while the Tzar's party feasts. Miller is selling his hedge-fund company, which baffles his daughter (Brit Marling) who is on the payroll and gets inquisitive about the books. Miller has everything, including a mistress who will be in the car when Miller crashes it. (Manohla Dargis's NYT review) 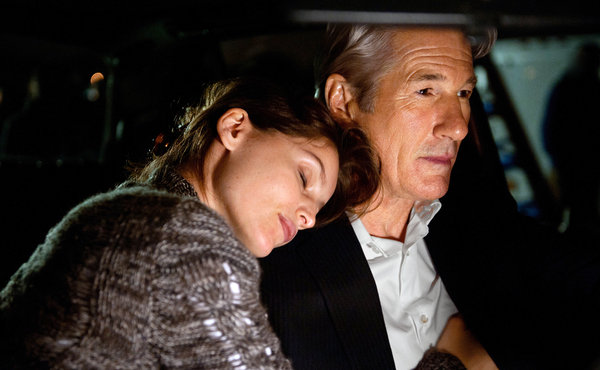 Earlier I remarked on Judd Apatow's This Is 40 and warned that you ought to expect what you get with certain directors. I noted that I once read a review of a Michael Moore documentary in which the reviewer went apoplectic over the fact that the film was a polemic. It's a Michael Moore movie; Michael Moore makes polemics; if you go to a Michael Moore movie you will get ... a polemic. Similarly, if you go to a Quentin Tarantino movie, you are going to get Quentin Tarantino. Don't go and then walk out of the theater affronted, insulted, shocked, outraged, disgraced, scandalized, or otherwise offended. Stay away. Period.

If anyone knows his American literary genres, it's Quentin Tarantino. From James Fenimore Cooper's Natty Bumppo and Chingachgook of the Leatherstocking Tales to Melville's Ahab and Ishmael to Mark Twain's Huck and Jim to the Lone Ranger and Tonto to I Spy's Kelly Robinson and Alexander Scott, and buddy movies too numerous to list, there is a strain of American literature and popular culture that has used The Interracial Friendship to explore the racial complexities of American culture. Then there's The Classic Western, one aspect of which is to make its Great Plains landscape itself a character, and its sub-genre, much beloved by Tarantino, The Spaghetti Western. There's The Con from Melville's Confidence Man to David Mamet's House of Games; The Self-Made Man from Benjamin Franklin's Autobiography to F. Scott Fitzgerald's Great Gatsby to Orson Welles's Citizen Kane; The Road from Jack Kerouac to Cormac McCarthy. There's Horror from Hawthorne's Major Molineaux to Poe's Usher to King's Jack Torrance and Craven's Freddy Krueger. There's Film Noir, Detective Fiction, Mystery, Southern Gothic, The Damsel in Distress, The Escape and, of course, there's Pulp Fiction. Taratino throws them all into one big potluck of inglourious fortune in Django Unchained.

It's two years before the Civil War when we meet German émigré Dr. King Schultz, played by the marvelous Christoph Waltz. He abhors slavery but is himself a Wild West bounty hunter, masquerading as an itinerant dentist, and quite aware that he, too, is dealing in a financial transaction with human flesh. Schultz has sought out Django (Jamie Foxx), a slave he has heard can identify the Brittle brothers whom Schultz is tracking. He frees Django in exchange for his partnership in pursuing the brothers. Django has been sold away from his wife Broomhilda (Kerry Washington), whom he is desperate to find. Schultz sees a man driven, and by way of parallel, tells Django the Norse myth of Siegfried's quest for Brünnhilde, the story of a man willing to confront the fires of Hell to rescue his love. Once the Brittle brothers have been dispensed with, the true quest to free Broomhilda from the evil plantation owner Calvin Candie (Leonardo DiCaprio) begins. Knowing money is no object for Candie, and that he will refuse to sell his slave simply because they want to buy her, Schultz and Django hatch a plot that will trap Candie's greed so that Django and Broomhilda can be reunited.

The broader question of slavery is addressed in Candie's sadistic, sneering question: "Why don't they just rise up and kill the whites?" An excellent article appeared January 15, 2013 on Truthout that puts Django Unchained and Calvin Candie's essentially rhetorical question into context. Thom Hartmann's "The Second Amendment Was Ratified to Preserve Slavery" wants us to understand that those militias referred to in the amendment were called "slave patrols" in the South, where slave rebellions were frequent. Only a police state could keep them down, and Virginia would not vote to ratify the Bill of Rights without the Second Amendment. "In Georgia, for example, a generation before the American Revolution, laws were passed in 1755 and 1757 that required all plantation owners or their male white employees to be members of the Georgia Militia, and for those armed militia members to make monthly inspections of the quarters of all slaves in the state. The law defined which counties had which armed militias and even required armed militia members to keep a keen eye out for slaves who may be planning uprisings.

"As Dr. Carl T. Bogus wrote for the University of California Law Review in 1998, 'The Georgia statutes required patrols, under the direction of commissioned militia officers, to examine every plantation each month and authorized them to search "all Negro Houses for offensive Weapons and Ammunition" and to apprehend and give twenty lashes to any slave found outside plantation grounds.'"

Django Unchained has been compared to Spielberg's hagiography Lincoln, I guess inevitably because they were released so close to each other and Django is about slavery, and Lincoln is ostensibly about slavery. Django is a much more confrontational dialogue with history, aesthetically and ethically, and, I believe, better for it. I agree with A. O. Scott's assessment that "[W]hat you see in Django Unchained is moral disgust with slavery, instinctive sympathy for the underdog and an affirmation (in the relationship between Django and Schultz) of what used to be called brotherhood." (A. O. Scott's NYT review/A NYT Critics' Pick)

"Still Too Good, Too Bad or Invisible" by Nelson George in the new York Times 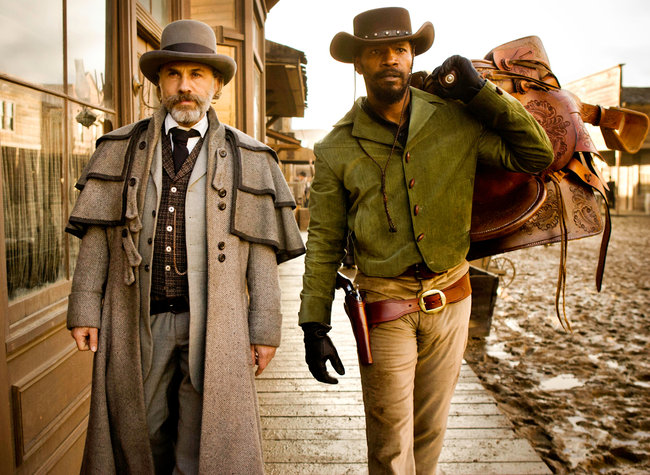 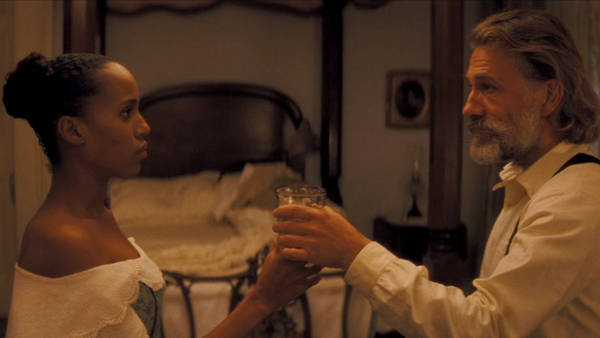 Promised Land, written by co-stars Matt Damon and John Krasinski, is agitprop, and really cynical agitprop at that. Damon was also slated to direct the film, but was replaced by Gus Van Sant. I am a Van Sant fan (the name of this series is an obvious homage) who has never understood why Van Sant is inevitably identified as the director of Good Will Hunting. That is not at all the film I think of when I think of him. I think of Drugstore Cowboy, My Own Private Idaho, Elephant, Last Days, Paranoid Park. I am happy that someone has taken up the topic of fracking, but the dangers are consequentially ruinous enough to deserve a more serious imaginative treatment. What is wonderful about the film is that it is possessed of a Van Sant look that makes the promised land of the title a character in and of itself. Filled with beautifully composed aerial shots and pans of rural Pennsylvania, Promised Land is a cinematographic American quilt. Of course, the promised land is at once the idyllic western Pennsylvania countryside and the promised future, a brave new world that will emerge as "progress" despoils that self-same land. (A. O. Scott's NYT review/Tom Carson's The American Prospect review) 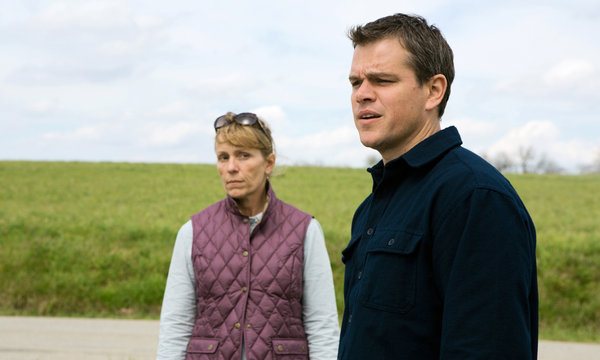