Anne Fletcher's The Guilt Trip is, refreshingly, not a stereotypical cloying Jewish mother vs. long suffering son movie. Yes, Joyce (Barbara Streisand) would like to see Andy (Seth Rogan) married, but she doesn't dwell on it. Yes, Andy would rather Joyce not regale her friends with intimacies of his infancy, but he seems to sense that she does it out of love and, for the most part, generously indulges her. Andy is an organic chemist who has invented a completely safe cleaning agent that he believes he can sell to big retailers. He has planned a cross country trip to make his pitches, but first he stops to visit his mother. She wants to know if he's seeing anyone, so he turns the tables on her. At one point during the course of their conversations she tells him he is named after her first love, Andrew. The information age being what it is, Andy has no trouble googling Andrew. The next morning he asks Joyce to join him, and the road trip, to which an extra stop has now been added, begins.... Brett Cullen does a nice turn as a Texan widower they meet along the way. (Stephen Holden's NYT review) 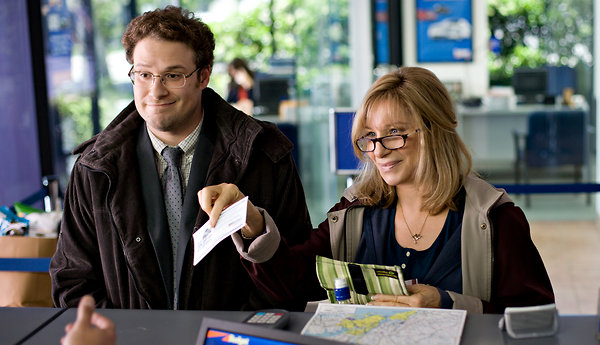 I once read a review of a Michael Moore documentary in which the reviewer launched into a rant that the movie was nothing more than a polemic, a polemic, I tell you! It's a Michael Moore movie, Michael Moore makes polemics, ergo.... In a subsequent post, when I get to Quentin Tarantino, I am going to grant the same clemency, so I guess, in all fairness I should extend the same to Judd Apatow, but jeez.... Watching This Is 40, I just did not like these people. They're self-indulgent, they whine, they've spoiled their children, neither of them wants to work, though they have done tastefully/ostentatiously well for themselves -- he at his recording label where he only signs aging musicians he was in thrall to in his youth; she at her trendy boutique that she rarely frequents, leaving it to two equally self-indulgent teens. So as they face the trauma of turning forty while his business goes into death throes and her business is at the mercy of an embezzling employee (rather than spend a day in the shop scoping things out, she goes clubbing with the suspected embezzler), while they ferry their kids in expensive cars to private schools, and while some invisible someone ostensibly keeps the house clean and another unseen someone manicures the lawn (typical of a Hollywood that takes maids and gardeners so much for granted that they never appear in a single shot) -- I JUST DON'T CARE! Get a life, people! (A. O. Scott's NYT review) 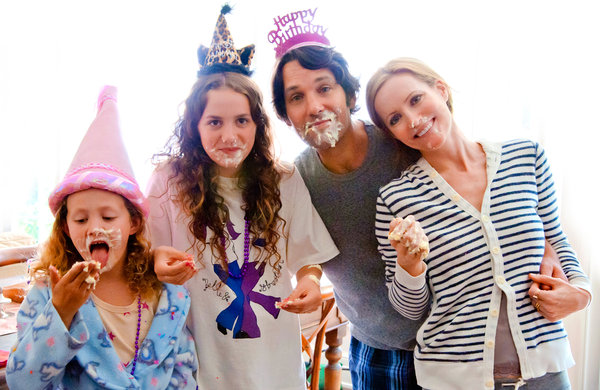 Alice and Phil are politically correct parents who encourage their three children to "use your words" rather than act out. Harper, the oldest, is a budding pianist; Turner is afflicted with a stutter; and little Barker is a brat. Alice enlists her parents, newly laid off minor-league baseball announcer Artie and his saintly wife Diane, to stay with the kids while she and Phil are out of town. The generational conflict in parenting styles is at the center of Andy Fickman's Parental Guidance, which doesn't suffer quite as much from its self indulgence as This Is 40 does, but it is still cloying. Bette Midler and Marisa Tomei are welcome as mother and daughter. It's hard to say whether Billy Crystal's Artie or the kids are more annoying. If This Is 40 and Parental Guidance are any indicators of the parenting zeitgeist, we're in real trouble. (Manohla Dargis's NYT review) 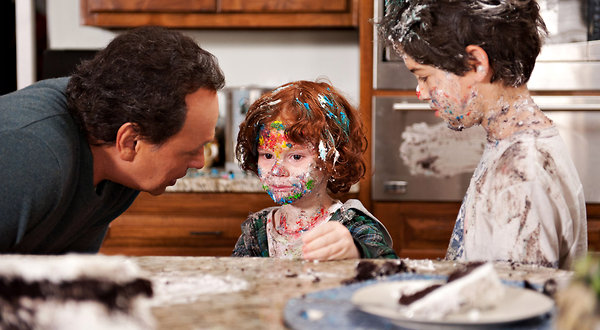