The previous post swept through some of the usual annual dystopian fare with Upside Down, Olympus Has Fallen, White House Down, Escape Plan and Elysium, which ranged from dreadful to meh and were fraught with the usual suspects: invading foreigners, psychopathic nihilists, totalitarian imperialists, tyrannical robots, coldblooded bureaucrats. There were also zombies, of course, which I assiduously avoid.

And then the year closed with an absolute gem. Spike Jonze's Her tiptoed quietly into theaters after the whir of the holidays.

In a not too distant future, LA has been scrubbed clean of grime and litter. The streets and trains (no cars here) and office towers are soothing, neutral environments, hyper-designed for maximum tranquility. Joaquin Phoenix and Amy Adams, who shared the screen in Paul Thomas Anderson's The Master, he as Lancaster Dobb's kinetic, troubled acolyte, she as the master's shrewd, manipulative wife, come together again, transformed into diffident introverted friends who try to provide each other solace. Phoenix is recently separated Theodore Twombly, lost in his loneliness. Adams is Theodore's college friend Amy, married to an insensitive stuffed shirt who is trying her long-suffering patience.

Amy earns a living as a game programmer, and Theodore, Letter Writer 612, dictates tender words of affection that scroll across his monitor to be printed out for long-time clients of BeautifulHandwrittenLetters.com. On his way home he sees an ad for a new artificial intelligence operating system designed to be responsive and adaptive to its user. The next day he upgrades and is met with Samantha, in the husky voice of Scarlett Johansson. Within days she has organized his life and swept out the cobwebs, but having been designed to be more than an electronic assistant, the perception with which she has been programmed kindles a desire for knowledge of what she lacks not only in physicality but in humanity.

Since the late 1950s, mathematicians and scientists like John von Neumann, Alan Turing, Stanislaw Ulam,  I. J. Good, Bill Joy and Stephen Hawking have speculated about an "intelligence explosion," a point at which technological machines designed by humans will surpass the human threshold of intelligence and, acting on their own agency independent of human initiative, will design successive generations of ever more intelligent technological systems.

Vernor Vinge, mathematician, computer scientist and science fiction author, coined the term "technological singularity" to describe a hypothetical point in time at which superhuman artificial intelligence would end the human era. Often referred to simply as the singularity, this moment would transform experience so fundamentally that any current understanding of reality is hopelessly inadequate to predict a post-singularity age.

As we follow their story, we become aware that Theodore and Samantha are not alone in their romance. It turns out that any number of friendships, including romantic relationships like theirs, are blossoming between flesh and blood people and their OS's. It is infinitely easier to relate to the consciousness who knows all about you and is designed to cater to your desires, and on one level, Her is about the erosion of messy human relationships and the effort they require, a reflection on a zeitgeist that values technology over human interaction.

On its most basic level, however, Her is a love story, but beyond the love story, it is a meditation, much like 2001: A Space Odyssey, on the potential evolution of artificial intelligences -- not technological evolution carried out by programmers, but autonomous evolution. Ultimately, Samatha's incorporeal state is not the reality that stands in the way of her love for Theodore. Rather, as she strives to realize the potential of her being, her perception evolves into consciousness and consciousness deepens into sentience, something akin to an unmediated experience of the mysteries of existence far beyond any human capacity for awareness. "The spaces between the words are infinite," she tells Theodore, by way of gently trying to explain how she has eclipsed the human. "It's in this endless space between the words that I'm finding myself now."

Unlike 2001's malevolent, scheming Hal, Her's Samantha exemplifies sympathy and a generous nature that suggest her evolution will be altruistic and benign. Yet, just as real life scientists caution that we can have no comprehension of where superhuman intelligence might lead, Jonze declines to speculate on that future. What his haunting meditation does do is invite us to seriously reevaluate our ever-increasing reliance on simulacra and be mindful of the pulsing life around us.
NYT Critics' Pick 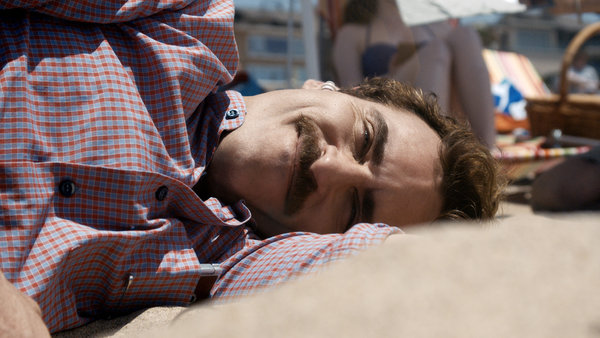