That there were a plethora of these movies this year (and I did not see them all) speaks to the title of one: Hope most definitely must spring if we go to this many movies about relationships. The very best of these represent the diverse range of human relationships that make up our lives amidst lovers, family, friends, acquaintances, and the greater world around us.


Jennifer Westfeldt seems to be banking on the popularity of Paul Feig’s Bridesmaids in the romcom Friends with Kids, which pretty much recycles that movie’s cast. Platonic friends, each of whom wants children (she more than he – surprise), decide to have a baby and agree to share in its care. Fast forward to [spoiler] their realization that they really are meant for each other: happily ever after. (Jeannette Catsoulis's NYT review) 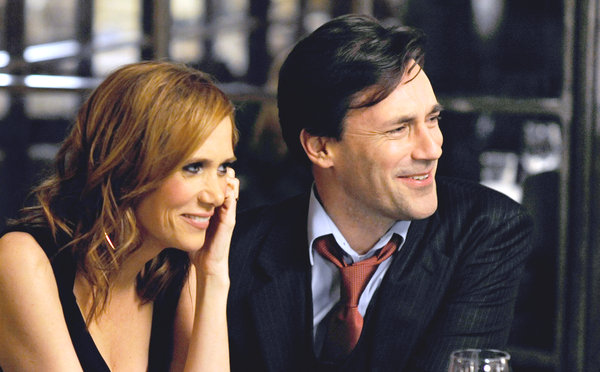 Robert De Niro did not get much attention for his turn in Kirk Jones’s family drama Everybody’s Fine (which, of course, everybody is not) in which he plays a recent widower making a late life attempt to come to terms with children from whom he has been emotionally distant and whom, he discovers, he knows little about. In Paul Weitz’s Being Flynn, he plays a different character, but is again a father who has been absent from his son Nick (Paul Dano), having left the young man’s mother years before. Jonathan Flynn's condition is not overtly described, but one imagines he suffers at the very least from bipolar disorder and certainly alcoholism, which have rendered him homeless and resorting to a shelter, where he is surprised to discover his son works. Nonetheless, he insists that he is a genius who has been working on a magnum opus for decades, a work that, he believes, will change the world. The part explodes with bluster, which to my mind, makes it an easier and less dimensional role than the quiet man he portrays in Everybody’s Fine, but in both De Niro captures the barely camouflaged confusion, the sadness for what his characters have missed, and their human longing to capture some small part of it before it is too late. Dano is also excellent as a writer who feels the sting of his father's disinterest in and dismissal of his own work. (A. O. Scott's NYT review)

I can't help but think that the character of Jonathan Flynn is in part based on the historical gadfly Joe Gould who inhabited the streets of Greenwich Village for almost 50 years, boasting of his life's work, An Oral History of Our Times. Joseph Mitchell wrote a two-part profile of Gould for the New Yorker, which provided the basis for the 2000 Stanley Tucci film Joe Gould's Secret in which Tucci portrays Mitchell and Ian Holm portrays Gould. On the occasion of the film's release, the Village Voice did an article, "Joe Gould's Secret History: The Diary of a Legendary Bohemian Surfaces at NYU." 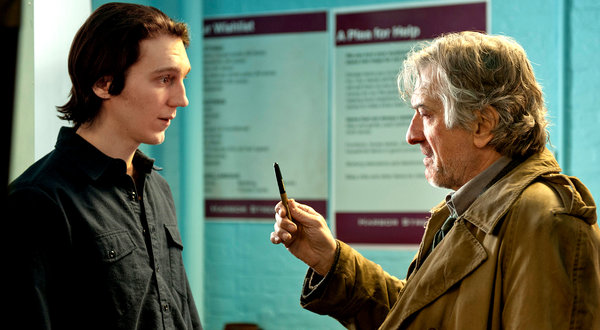 My only thought as the credits began to roll on Whit Stillman's Damsels in Distress was to ask, How on earth did this thing EVER GET MADE??? It struck me as a complete mess about nothing, but maybe the whole thing eluded me because A. O. Scott says in his NYT review that "this peculiar, uneven campus comedy would be worth seeing for the delightful felicity of its dialogue," and it's "...remarkable for feeling both exquisitely observant and completely untethered to any recognizable social reality." Well, I agree with the first part of that initial observation and with the last part of the latter. The damsels in question run the campus suicide prevention center and are part of a clique, headed up by Violet Wister, who is wistful for an earlier time. Violet (Greta Gerwig, who manages a striking performance despite the weaknesses of the film) works earnestly to lay a veneer of medieval ladyhood over the vulgarities of contemporary young adult life. (My spellcheck didn't like the word "ladyhood," so I googled to see if it is, in fact, a word. Apparently it last appeared in Webster's 1913 Revised Unabridged Dictionary.) The male sex is viewed in terms of categories instead of as people --  morons, playboys, operators -- which further undermines the film's efficacy. 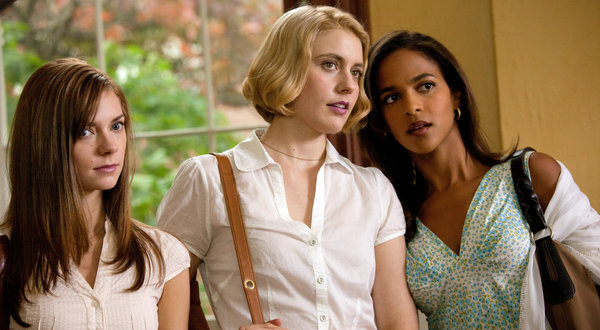 John Madden’s The Best Exotic Marigold Hotel, based on Deborah Moggach’s novel These Foolish Things, is a sweet, geriatric ensemble piece, which the Brits do so well. Judi Dench, Maggie Smith, Penelope Wilton, Celia Imrie, Ronald Pickup are all quite wonderful, but the two stand out performances are from Tom Wilkinson as a gay man who, because of the accident of time and circumstance, has been thwarted in love, and Bill Nighy as a hen pecked husband who endures an onslaught of humiliations while showing humor and good will toward his traveling companions. The only fly in the ointment is Dev Patel (who was fine in Slumdog Millionaire) whose insufferable, paroxysmal performance made me wish I could scream him off the screen and whose clumsy love storyline should have been written out of the script altogether. (Stephen Holden's NYT review) 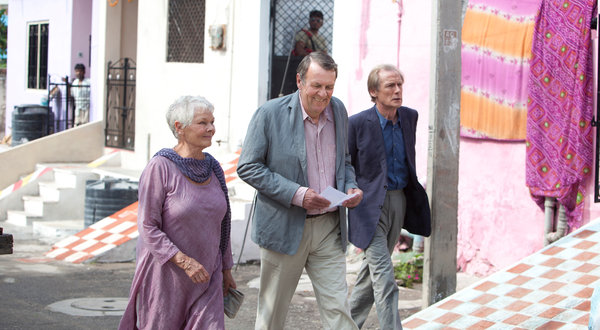 Bruce Beresford's Peace, Love and Misunderstanding is a formulaic family comedy set in Woodstock, where an unreconstructed though well-heeled hippie grandma, who has apparently followed her bliss, lives in an idyllic farmhouse among an equally affluent community. (From whence that affluence comes we do not know, a Hollywood tic I cannot stand.) Jane Fonda plays the grandmother a little too flamboyantly for my taste, but the  film is redeemed by Catherine Keener as Grace, a New York City lawyer who is her daughter and comes home to deal with the death of her marriage. In addition to Keener are Elizabeth Olsen and Nat Wolff as Grace's children, and they hold their own with the veterans. With lessons learned about letting go and the important things in life (that affluent people can pursue without the consequences the rest of us are saddled with in our quotidian lives) everyone ends suitably paired up. (Stephen Holden's NYT review review) 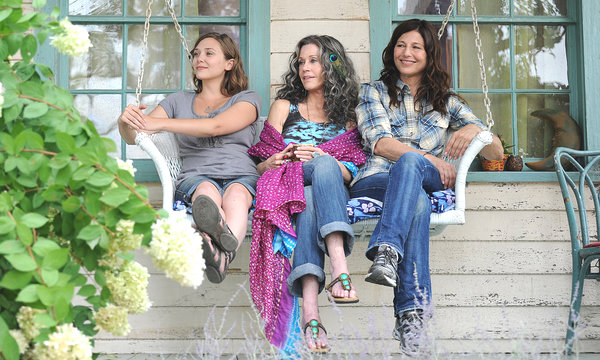 I am a Wes Anderson fan and he charmed me again with Moonrise Kingdom. Anderson's casts of quirky characters demonstrate over and over that what we have come to call dysfunctional families are really not dysfunctional at all, if we're just willing to embrace the dysfunction. There are two soul mates at the center of Moonrise Kingdom. Sam and Suzy are 12-year-olds during the same era that I was twelve, and the film evokes many cultural artifacts from that mid-'60s era, from Sam's copy of Benjamin Britten's Young Person's Guide to the Orchestra and the little portable record player he carries around to play it on to the strains of Françoise Hardy's "Le Temps de l'Amour" to the Boy Scout troop to the coonskin hat Sam dons for their elopement. Manohla Dargis's lovely NYT  review notes that "'Clever' is sometimes used as a cudgel against Mr. Anderson..., primarily, it seems, because he makes personal, rather than industrial, films that don't look, move or feel like anyone else's. The people in his work, their passions and dramas, are true and recognizable...but they exist in a world apart, one made with extraordinary detail, care and, I think, love by Mr. Anderson." 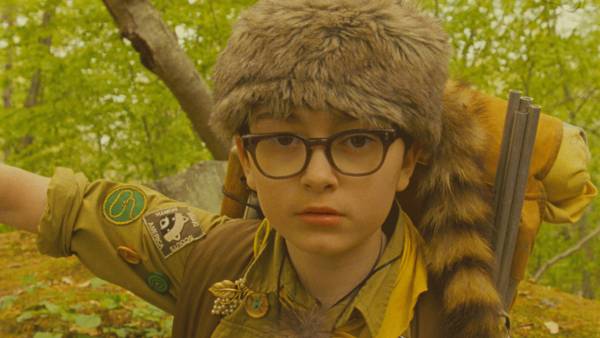