Inocente has been homeless for most of her fifteen years. In spite of that, and her status as an undocumented immigrant, she has relentlessly followed her driving ambition to become an artist. Sean and Andrea Fine follow her day to day in Inocente, and through her first exhibition coordinated by San Diego's A Reason to Survive (ARTS) founder Matt D'Arrigo. Another documentary that yet again proves the redemptive power of art.

Sari Gilman visited her grandmother at Kings Point for 20 years. Out of that experience came Kings Point, her documentary that follows six of its residents over the course of eight years. Speaking with Ben Crandell of southflorida.com, Gilman says, “There are people who are experiencing all the same joys and challenges that we all do. Ultimately, looking for human connection.” Essentially isolated from the rest of the world in the seniors-only condominium, the residents of Kings Point give the lie to the rosy promise of retirement villages.

On the third Monday of every month, sisters Cynthia and Rachel open their Long Island Racine Salon de Beaute & Spa to women undergoing chemotherapy. Cynthia Wade's Mondays at Racine introduces us to several brave women battling breast cancer, but it closely chronicles two in particular: Cambria, a 36-year-old mother with Stage 3 breast cancer who, with her husband, is trying to adopt their foster child; and Linda, a 58-year old -- diagnosed 17 years ago and told she had five years to live -- whose marriage is finally falling apart. Though there is sadness, hardship, loneliness, isolation, and need in all of this year's Documentary Shorts, Mondays at Racine was the one that I wept through uncontrollably. The byline on the film's website asks, "When your life is at stake, why is losing your hair so hard?" 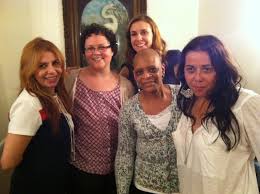 Cynthia and Rachel flank their clients.

Rwanda has been beset by many scourges, among them, the shortage of penicillin to treat strep throat and its consequent plague, rheumatic heart disease. The disease destroys the heart's valves and dooms its victims to suffocating deaths. Kief Davidson's Open Heart follows eight Rwandan children, some of whom without treatment have a matter of months to live, as they travel far from their families to journey to the Salam Centre in Sudan for surgery. The film focuses as much on the struggles of Dr. Emmanuel Rusingiza, Rwanda's only public cardiologist, and Dr. Gino Strada, chief surgeon at the Salam Center, a free clinic founded on the ethos of "The Right to Be Cured," as it does on their young patients.

Marie, 17, with her doting father

In New York City, there are many jobless people who barely scrape together a subsistence living collecting cans and bottles from trash and recycling bins and redeeming them for money. Jon Alpert and Matthew O'Neill take us into the sub-culture of  "canners" in Redemption, a film about the resilience of the human spirit under the pressure of unimaginably trying circumstances. In an interview with Drew Taylor for Indiwire, Alpert explains, "We tried to pick a group that was representative of backgrounds and would ... represent ... different strata of ... people ... forced to go can collecting" -- from Chinese immigrants to a former award-winning computer technician to vets. There is turf competition among the canners, but camaraderie as well, as they redeem what the rest of us throw away, five cents at a time.